WOBURN, MA, MAY 14, 2021 — In an effort to disguise his fingerprints, the prohibition-era gangster John Dillinger famously had doctors cut away the outer layer of his skin, the epidermis, and dip his fingertips into hydrochloric acid. Since then, criminals looking to evade capture have had their fingerprints sanded off, burned off with cigarettes, and have applied super glue so the ridges were not identifiable.

Fingerprints link people to their arrest records and outstanding warrants. Obliterating them seemingly provides a clean slate. However, a collection of skin layers, around 200 − 400 µm beneath the finger surface, is composed of live cells that is collectively called the “viable epidermis” or internal fingerprint. It essentially has the same topography as the finger surface. One of the most promising identification technologies for imaging below the surface of an external fingerprint is full-field optical coherent tomography (FF-OCT). While effective, FF-OCT can be expensive and cumbersome, despite its proven ability for biometric use, and is limited to large benchtop systems.

To overcome these limitations, researchers at the PSL Research University (Paris, France), the Polish Academy of Sciences (Warsaw, Poland), and the Norwegian University of Science (Gjøvik, Norway) developed a more compact, mobile and inexpensive FF-OCT that may lay grounds for enabling more widespread use of this technology. The newly designed system is comprised of an Adimec two-megapixel camera, a BitFlow Cyton-CXP4 CoaXPress four-lane frame grabber, an interferometer and a NIR light emitting diode. The system enables recording of 1.7 cm × 1.7 cm images of subsurface finger features, such as internal fingerprints and sweat ducts. A lightweight slab of plexiglass of 30 cm × 30 cm × 1 cm in size was used to cover the top of the system, against which a hand could be rested during the fingerprint imaging for a more stable acquisition.

LED illumination provided 900 mW of spatially incoherent light at 850 nm. Light was magnified 5X by lenses so that the divergence of the emerging light from the LED is decreased. This design helped to retain as much of the LED’s light as possible, which was necessary to operate the camera close to its saturation level and to ensure the homogeneous illumination of the entire sample area.

One of the challenges the researchers faced was running the camera at a maximum speed of 720 frames per second (fps), which together with the large number of pixels put a high demand on the data transfer requirements between the camera and the computer. To address this problem, the BitFlow Cyton-CXP4 frame grabber — capable of transferring the data at the maximum speed of 25 Gb/s — was installed. The sensor was controlled by an Adventech microcomputer with one PCIex16 slot dedicated to the BitFlow frame grabber. Thirteen FF-OCT images could be acquired at different depths by stepping a reference reflector every 50 µm between the acquisitions, resulting in images acquired in the range of 0 µm to 600 µm. Each was recorded in 570 milliseconds at 2116 dpi showing both the subsurface fingerprint and sweat ducts.

To demonstrate the accuracy of the FF-OCT, testing of 585 subjects and 6 unique fingers for each subject was conducted. Commercial-off-the-shelf fingerprint software from Neurotechnology was used, resulting in a Detection Error Trade-off and Receiver Operating Characteristics that showed a false rejection rate of 1.38% and the False Acceptance Rate of 0.1%. These results support the applicability of the new system for fingerprint imaging in real-life deployment.

Researchers found that the new FF-OCT was particularly useful when the surface of a finger is heavily damaged. The FF-OCT can still record a fingerprint image because of the remaining internal fingerprint, which is actually now easier to image because most of the scattering and absorbing epidermis layer is removed.

Researchers are continuing their work hoping to create even more compact and cost-effective FF-OCT designs, along with improved algorithms for better extraction of subsurface information.

To save space, SFF PCs are typically fanless making them susceptible to overheating if airflow isn’t sufficient to dissipate heat from FPGA (Field Programmable Gate Array) processors that are often required to tackle demanding and intelligent vision tasks. The dense congestion of components within the SFF PC restricts airflow and space, which makes the use of many conventional cooling devices difficult to cool an FPGA.

Newly redesigned BitFlow Cyton CXP4-V and Claxon CXP4-V quad-channel frame grabbers were developed using the legacy architecture of their fan-less counterparts, so integrators can have complete confidence when selecting either of these field-proven designs for their vision systems. The Claxon CXP4 frame grabber is a quad CXP-12 PCIe Gen 3 frame grabber that supports one to four CXP-12 cameras and multi-link CXP-12 cameras, with CXP speeds from 3.25 to 12.5 Gb/S. Each connected camera has its own I/O and can draw up to 13 W of power. The Cyton CXP4 frame grabber is based on the CoaXPress 1.1 standard and has a Gen 2.0 x8 PCI Express bus interface on its back-end for high-speed access to host memory in multi-camera systems. Both frame grabbers support simple triggering modes and complicated, application-specific triggering and control interactions within any hardware environment.

“Although a small form factor PC consumes less power and produces less heat than its larger brethren, manufacturers are increasing the power of their microprocessors, putting more units per rack, and filling up the racks as much as possible, making overheating a serious issue,” said Donal Waide, Director of Sales for BitFlow. “With a lot of these small form factor PC’s the manufacturer is choosing to go fanless where possible but the powerful FPGA generates more heat than the heat syncs can dissipate quickly. Our new Cyton and Claxon CXP frame grabbers deliver extremely fast data transfer plus offer the added value of cooling protection for our customers’ computing investments.”

WOBURN, MA, OCTOBER 19, 2020 — Optical mapping is an imaging technique that measures fluorescence signals across a cardiac preparation with high spatiotemporal resolution. Optical mapping of transmembrane voltage and intracellular calcium is a powerful tool for investigating cardiac physiology and pathophysiology.

Researchers at the Sheikh Zayed Institute for Pediatric and Surgical Innovation, Washington, DC, recently introduced a novel, easy-to-use approach to optical mapping that requires only a path splitter, a single camera, a frame grabber and an excitation light to simultaneously acquire voltage and calcium signals from whole heart preparations.1 This cost-effective yet highly reliable system eliminates the need for multiple cameras, excitation light patterning, or frame interleaving, therefore aiding in the adoption of dual mapping technology by the broader cardiovascular research community, and decreasing the barrier of entry into panoramic heart imaging.

At the heart of the new system is a BitFlow four-channel frame grabber. It is used for imaging control and acquisition from an Andor Zyla 4.2 PLUS Scientific CMOS (sCMOS) camera acquiring images at 4.2 megapixels. A 10-tap CameraLink™ connection with a clock rate of 85 MHz was necessary to achieve the fastest frame rates possible. The researchers selected the BitFlow frame grabber in part because of its “2x” mode that shares DMA responsibility between two DMA engines, effectively doubling the frame grabber’s bandwidth and providing much needed headroom to DMA images from the camera continuously, regardless of system load. Because of the high data rate of acquisition — due to high spatial and temporal resolution and bit depth — an NVMe SSD disk was also essential for reducing data rate bottlenecks.

To achieve optimal results, an image splitting device is positioned in front of the sCMOS camera. A fixed focal length 17 mm/F0.95 lens is attached to the front of the device for experiments with rat hearts, while a wide-angle 6mm f/1.2 lens is used for pig hearts. To guide manual alignment, MetaMorph software from Molecular Devices overlays live images as contrasting colors or as subtractive grey scales to highlight misalignment. With this live feedback, images are quickly aligned using the “long” and “short” control knobs. After alignment, any standard image acquisition software can be used such as MetaMorph, μManager, or Solis. The acquired image includes two fields which can be separated using imaging software that includes automated tools.

The computer consisted of a Xeon CPU E3–1245 v5 3.50 GHz (Intel corporation), 32 GB of RAM, and a non-volatile memory express solid state disk (NVMe SSD, Samsung 960 Pro). Notably, the platform is composed entirely of off-the-shelf components, which will help in the adoption and successful implementation of this setup by other laboratories.

Photo caption: A Optical system configuration with image splitting device positioned in front of a sCMOS camera. B Emission of each complementary probe (Vm, Ca) is separated by wavelength using an image splitting device. C Dichroic cube setup with the two emission filters and a dichroic mirror. 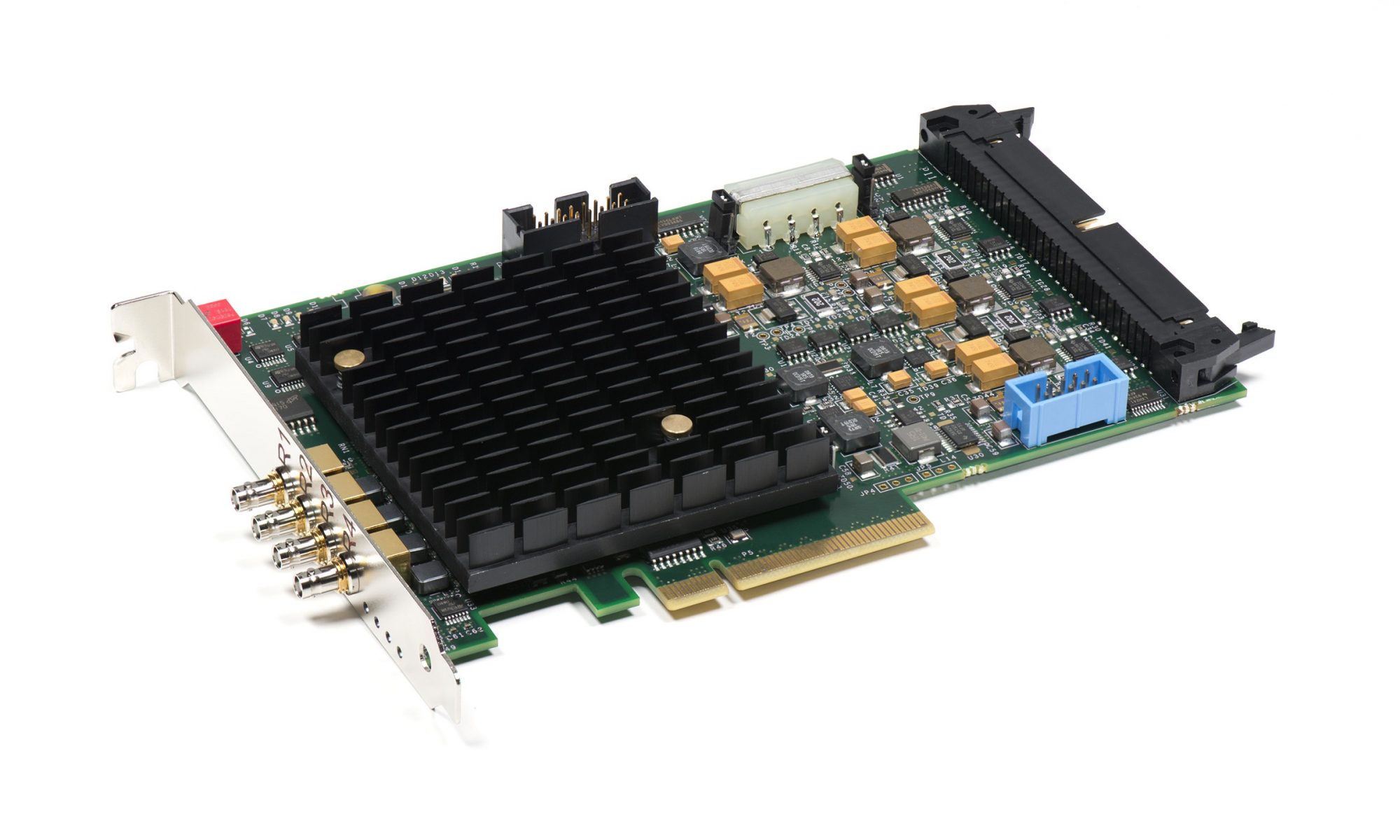 WOBURN, MA, JUNE 23, 2020 – The challenges facing today’s machine vision integrators are more complicated and critical than ever before, as they strive to build faster, more accurate and cost-efficient systems in the wake of changing technology. To that end, BitFlow has published a new whitepaper Controlling CoaXPress Cameras from The BitFlow SDK Tools, Configuration File and APIs designed to help integrators new to the CoaXPress (CXP) standard introduce advanced CXP cameras into system infrastructure to shape positive outcomes.

CoaXPress is the world’s fastest standard for professional and industrial imaging applications such as machine vision, medical imaging, life sciences, broadcast and defense. It is an asymmetric point-to-point serial communication standard that transmits video and still images, scalable over single or multiple coaxial cables. It has a high speed downlink of up to 12.5 Gbps per cable for video, images and data, plus a lower speed uplink up to 42 Mbps for communications and control.

An invaluable learning tool, the 10-page whitepaper details the flexible CXP tools available in the BitFlow SDK (Software Development Kit), and how they work in concert to meet different application needs. It also provides examples showing optimization of a CXP machine vision system, accelerated and simplified by the BitFlow SDK.

The publication of the new whitepaper is part of the rollout of the new BitFlow Claxon CXP-12 PCIe Gen 3 frame grabber. CXP-12 is the latest CoaXPress speed jump, now transmitting video at 12. 5 Gb/S.

Get your copy here.

BitFlow will be exhibiting at the CRAV conference at the DoubleTree by Hilton San Jose from Tuesday November 12th through Wednesday November 13th.  Come stop by tabletop #63 to see our latest offerings.

Cameras from ISVI, Sentech, IO Industries and CIS Corp were on display highlighting our Cyton CXP4.

Our soon to be released Claxon CXP4, a CXP-12 frame grabber, was highlighted in a demo.

Our distributor, ATMV, also exhibited and had a few of our frame grabbers on display.

Our latest released CoaXPress frame grabber, the Claxon, was on display.  The Claxon, which can run at up to 12.5 Gb/S, is our CXP-12 frame grabber which will be available in Q2 2019.

A demo showcasing our Cyton CXP4 with 4 single channel CXP cameras was on display.  These cameras were focused in on our Aon-CXP, single link frame grabber.  Cameras on display included ISVI, CIS, Adimec and Sentech.

The Cyton CXP HALCON demo was front and center catching the attention of many attendees.

Located in Hall 1 Aisle A we had a prime location for lots of booth traffic.

If you attended the show and did not get a chance to stop by our booth, please visit us online, submit an inquiry or give us a call at 781-932-2900.

BitFlow recently exhibited at the AIA CRAV conference at the Hyatt Regency in Santa Clara, California.

Cameras from ISVI, CIS, Adimec and Sentech were used in a demo highlighting our Cyton-CXP4.

BitFlow will be exhibiting at the CRAV Conference at the Hyatt Regency Santa Clara from Wednesday October 24th through Thursday October 25th.  Stop by tabletop #3 to see what we have on display!